For the last years I’ve been using my job laptop as my only personal full computer, since most of my needs where well covered by a great 4 years old Samsung Galaxy Tab S (was an expensive purchase, but totally worth). I had an old workstation that I set up with Windows for my partner, an old laptop that I passed to my mom, and the tablet that I passed to my sister just a few days ago. So when I returned to CARTO aldaia, my beloved Mountain Nickel (best laptop I’ve had, by far), I find myself wondering what could I get. My minimal requirements where quite specific:

I’m a Linux/Android person so an Apple device was not in my radar, but I even checked on the new Microsoft Surface devices. Eventually I started looking at Chromebooks after hearing good things about the Pixelbook and the new Crostini project to support also Linux environments.

The problem is that good Chromebooks are not easy to get in Spain, but I found in Amazon a retailer from Maine that sends (taking care of customs) HP Chromebook X2. So I ordered one of them. You can find plenty of reviews so I will only point the main specs:

And that’s all I have to say about the hardware. I’ve also got a (shitty) cartography themed cover, a much portable USB C charger than the default brick, and a hub I can use at home to just plug one USB C to the laptop and have everything in my desk running: main screen, webcam, keyboard, trackball, USB sound card, and wired network. 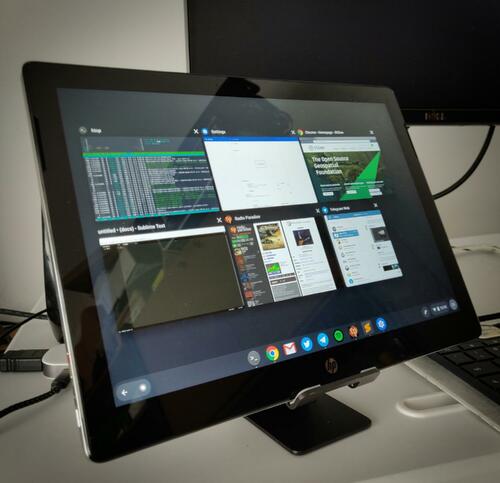 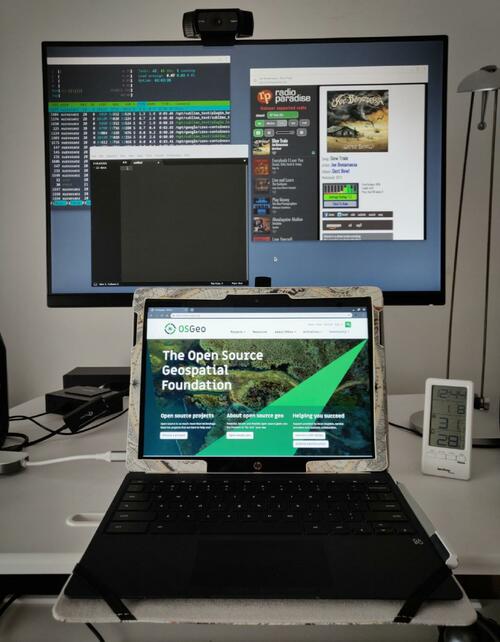 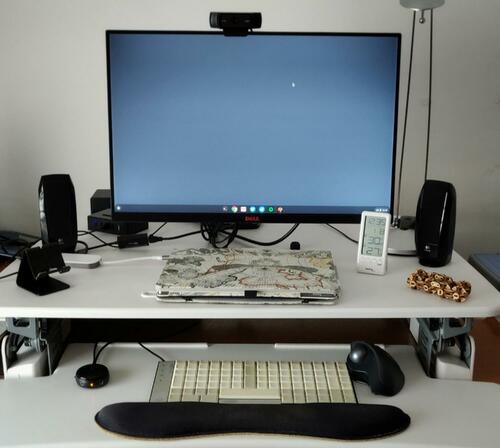 Now about the software. Chrome OS was intended to be in essence an operating system to just run the Chrome browser and leverage the web to its maximum: off-line applications, progressive web apps, etc. The reality is that Google eventually also started supporting Android applications which added quite a lot of nice software, specially those apps that cache content in the device for off-line usage like Spotify, or Netflix. And finally the last addition has been to support Linux virtual images natively, including by default a Debian 9 environment.

So I have a device where I can decide if I want to use a Chrome browser application, an Android application, or a Linux application. Examples for the three different options could be:

Then what about the Operating System itself? well it’s clear it is aimed to very casual users, everything is super simple, and works smoothly so far. The application drawer is good enough, the notification area provides all the necessary connections to switch hardware stuff, and the settings for the OS work just like the rest of the Chrome browser ones.

The only annoyance I found was that it does not support Spanish Dvorak layout so I found myself now learning the US one (the international variant to support special characters from Spanish like our loved ñ). This is something I’ve been looking into since I know many Spanish folks that moved to the English distributions because the symbols are more conveniently located for coding tasks.

I’m pretty happy with the device and current shape of Chrome OS, more RAM would probably allow me to do more intensive tasks, which in any case was never my intention. Still, looking forward to see how Google evolves the OS since it’s clear they are putting effort in making it a suitable environment for developers and techies in general, moving a bit away from the initial education users base.